One of the joys (and difficulties) of teaching students about the early modern period is that there are so many subtle differences between 1600 and 2014. In Shakespeare's time, spelling wasn't standardized, mass production didn't exist, and blood-letting was a sensible medical practice. Without taking up too much time in the classroom, how can we as teachers underscore these important differences, which can help students gain a foundational sense of the time period they're about to study?

As one possible solution, I propose lingfish. Lingfish are great for a couple of reasons. First, it's fun to say "lingfish." Second, they're apparently great with butter. And, third, the students probably won't have any idea what they are. (I confess: I didn't have any idea what they were, either, until I took a paleography seminar at the Folger Library, and we transcribed a very fishy dinner menu.) This lack of familiarity means that you can introduce students to a range of fantastic databases and online resources, which will help them learn what lingfish are. (And also, you know, where to look for help with strange early modern words and concepts, in general. Which is the sneaky pedagogical goal.)

Here are some fun things to ask your students to do with lingfish:

1) First, explain that spelling was not standardized, and that vocabulary was pretty flexible. Students will therefore need to type "ling," "lyng," "lyngfish," and "lingfish" in each of the resources below. (They should also try "fish," on its own, which produces some delightful results.)

2) Then, split your students into small groups, and ask each group to find information about lingfish (or fish in general) in each of the following online resources. This shouldn't take very long, and each group can share an interesting fact with the rest of the class.

Resource #1: The Early Modern Recipes Collective. [Because people did really weird and interesting things with fish. Importantly: lingfish aren't featured in this collection. This is a deliberate plant, because it allows you to discuss what to do if you're not finding your specific word or concept right away.] 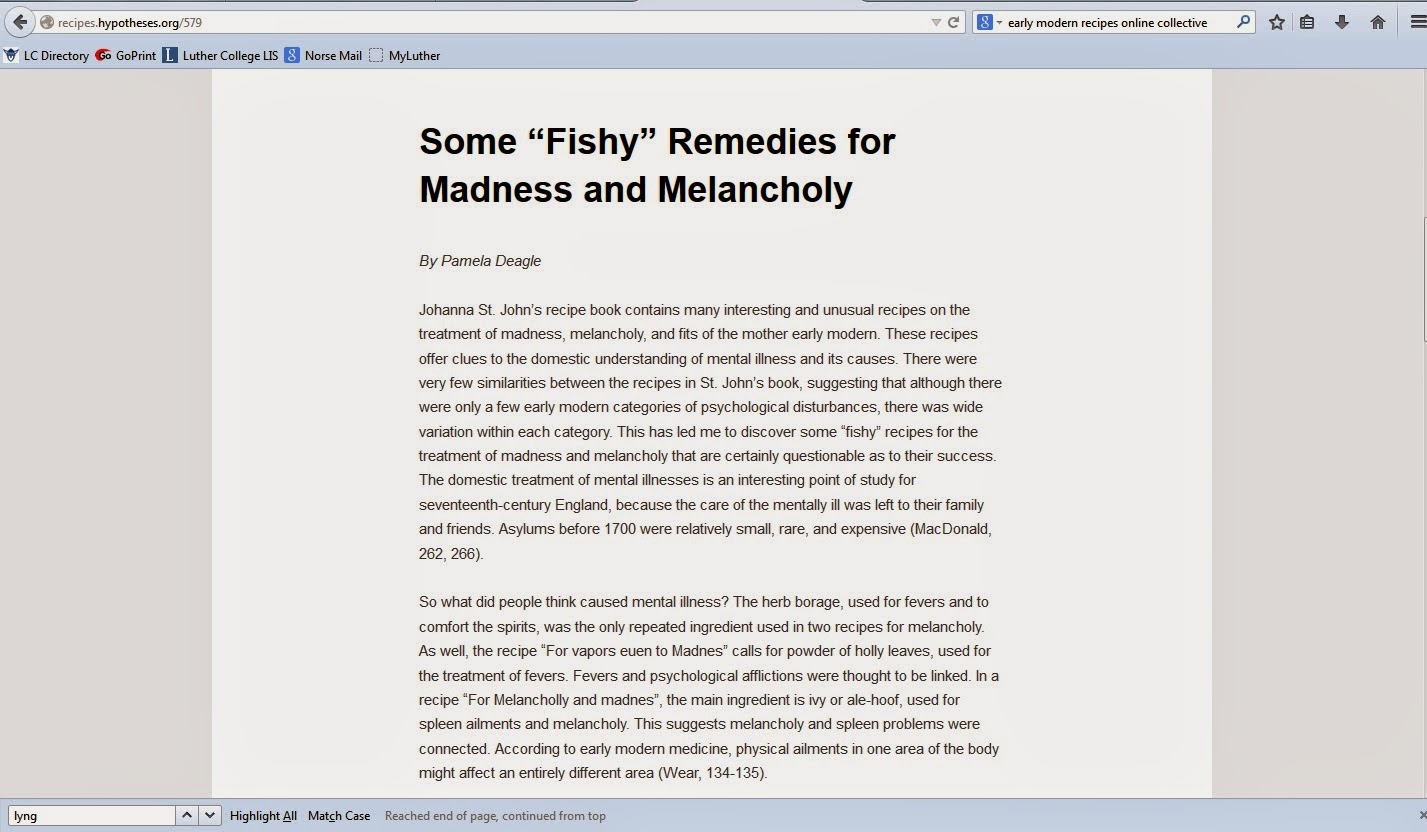 Resource #2: Luna: the Folger Shakespeare Library's searchable digital archive of manuscripts, correspondence, and more. [Because ling transactions were worth writing home about. And students get a kick out of seeing early modern handwriting.] 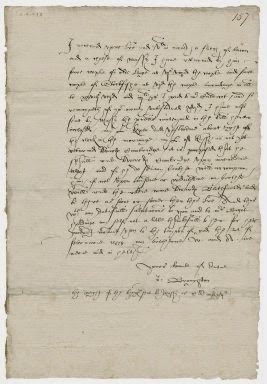 Resource #3: The OED. [Because, after all, it's important to know what lingfish is, and how folks were using it in literary contexts. Jonson, Shakespeare, and Pepys are all cited here. (Also, fun fact: "ling" can mean different things in the US and the UK, and that transatlantic difference can be important to highlight.)] 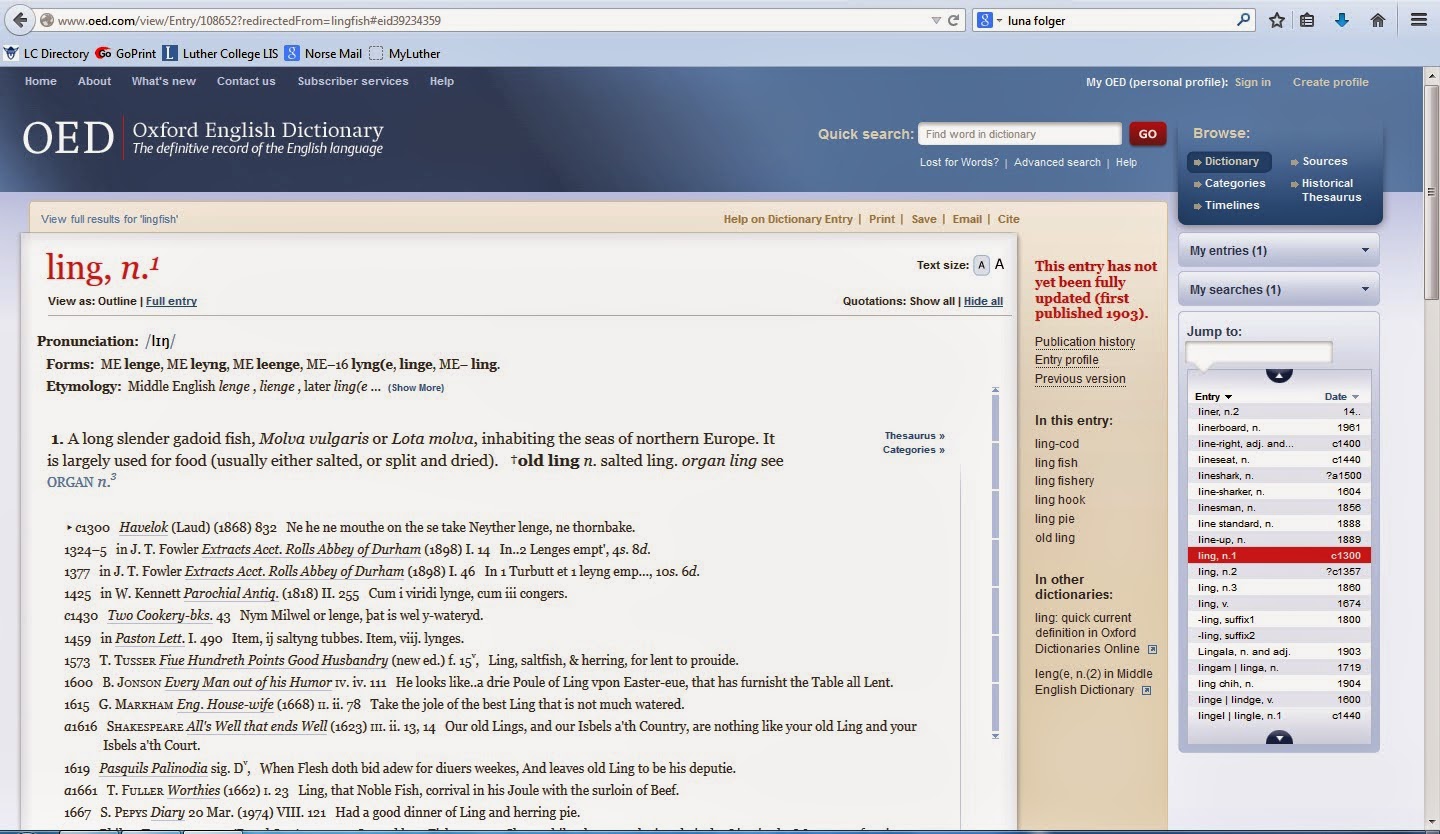 Resource #4: EEBO. [Because everyone should have the experience of typing "lyng" into a search engine that does variant spellings, at least once in his or her life. Bonus: you get to talk about strategies for refining a search. And, also, about the probable happiness of sailors on ships that have been "victualed, with 32. sortes of Ling."]

Posted by Nancy Simpson-Younger at 11:32 AM No comments:

What I did on my summer vacation (and, um, my spring semester!)

After a couple of months of focusing on research and teaching, I'm excited to surface and share what I've been up to. On campus in the spring, apart from developing two new classes ("Literature and Medicine" and "Literature by Women"), I helped to plan a day-long birthday party for Shakespeare, featuring three live scene performances and an "insult smackdown." Here's a YouTube clip of me talking about the events:


Especially after hearing Coppelia Kahn's thoughtful SAA talk on commemorating Shakespeare, my colleagues and I were enthusiastic about staging the texts themselves.

My year's Shakespeare theme continued when I spent the month of June in Washington, DC, taking a paleography course with Heather Wolfe at the Folger Shakespeare Library. We learned to read secretary and italic hands, and spent hours in the reading rooms, poring over manuscripts. For our final project, my class transcribed selections from the miscellany of Henry Oxinden, c. 1642-1670. Here's what my chosen opening looks like: 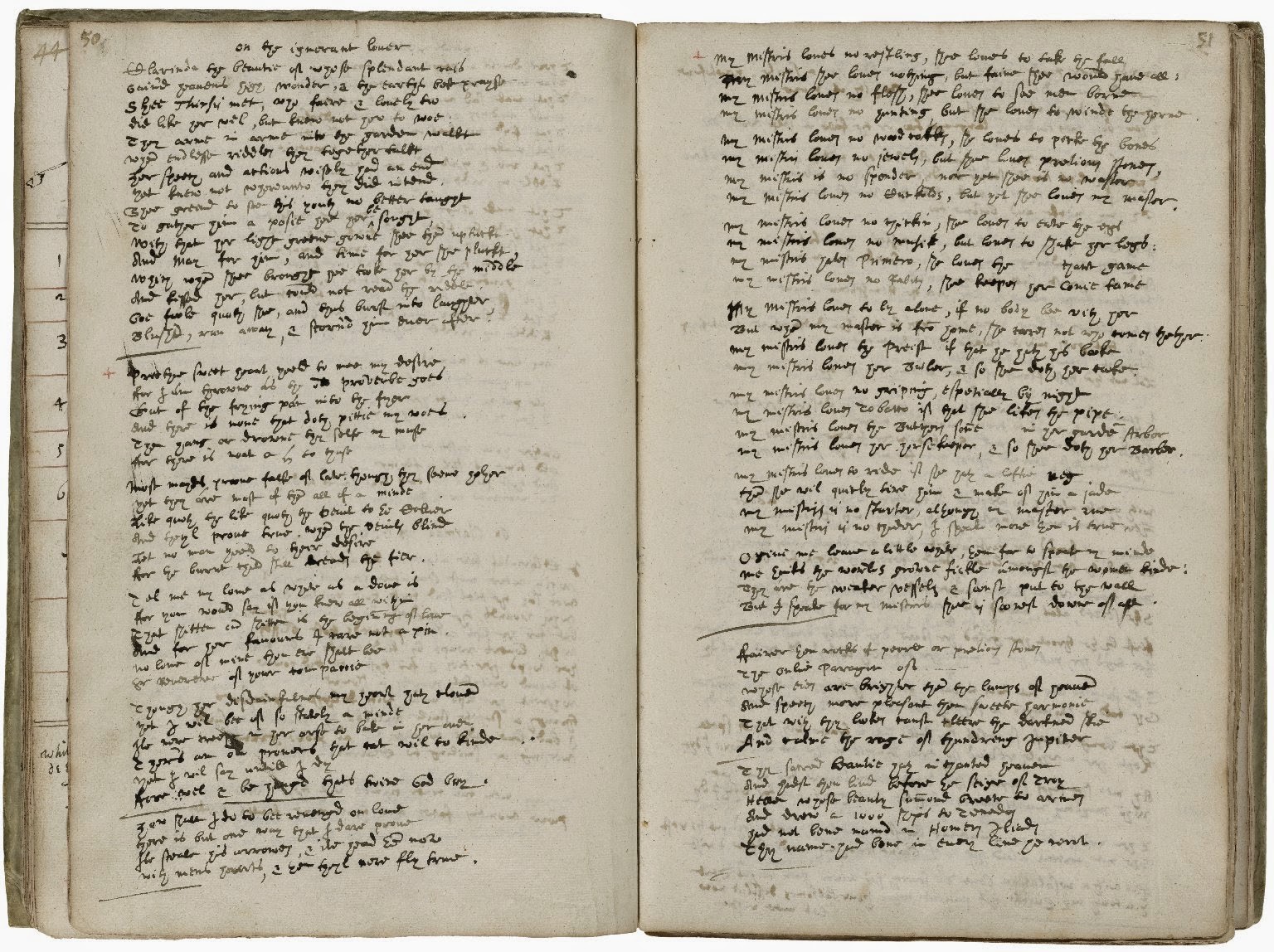 (For a larger version of the page, displayed on the Folger's fantastic (and free!) Luna manuscript database, just click on the image.)

Finally, I'm capping off my summer in three ways. First, I'm finishing an article on watching the sleeper in Macbeth. I'm also taking part in a summer reading workshop for teachers of Paideia (an introduction to the humanities course). My group has just finished We Need New Names, a compelling novel about diaspora and identity that won the PEN-Hemingway prize earlier this year. Finally, I'm preparing to welcome my first group of advisees to their new college careers. So it's been a busy but productive few months!

Posted by Nancy Simpson-Younger at 8:09 PM No comments:

Nancy Simpson-Younger
Nancy Simpson-Younger is a visiting faculty member in the English department at Luther College. In December 2013, she successfully defended her doctoral dissertation, called "Watching the Sleeper in Early Modern English Literature." The project asks how the act of watching people sleep becomes a process that can create literary communities (and lead to a community ethics). In her spare time, she enjoys knitting and napping--preferably unobserved!